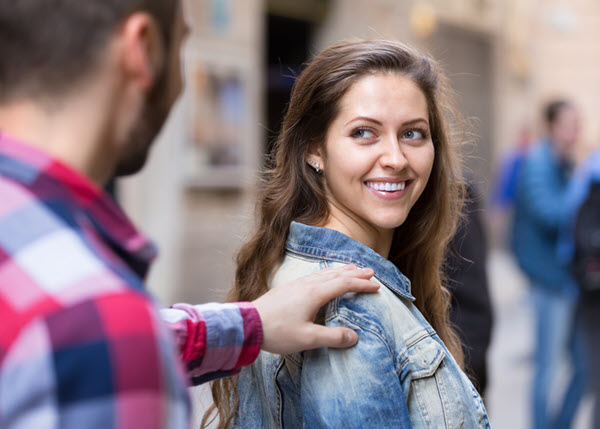 Who needs a Craigslist missed connection ad when you can get a billboard? At least that’s what Las Vegas hotel Park MGM had in mind when they noticed Devin Custalow’s Missed Connections ad on Craigslist and decided to paint a billboard in hopes of helping her find love.

This story starts as many do: Custalow, a 25-year-old Brooklynite was riding the G-train on the way back from Coney Island when she made eye contact with a cute stranger wearing yellow shoes. As she told Park MGM, “you can kind of feel when someone is looking at you.” They made eye contact throughout the ride, however, “when we got off the train and we both realized we wouldn’t have the chance to speak to each other, I noticed the disappointment on his face,” she says.

So, Custalow did what anyone in this situation would do: she penned a Craigslist ad hoping to find the yellow-shoe-wearing stranger she made goo-goo eyes with on the subway. While the guy didn’t respond to her now deleted app, it did capture the attention of a team from the new Park MGM hotel in Las Vegas. Wanting to help, they launched a social media campaign using the hashtag #IfItsMeantToBe. The hotel then painted a 20-foot mural in Williamsburg, recreating Custalow’s original Craigslist ad and calling for the “guy in the yellow shoes” to meet her at the mural (on North 10th St and Wythe Ave) at 1 pm. on Valentine’s Day. The plan was to livestream the encounter.

However, while her yellow-shoe-wearing love interest is still at large, Custalow refuses to be bummed out by the experience.  As she told CBS New York, “this has been such a great experience and I’m really just happy to be here.” She says, “I think you have to put yourself out there. There’s no harm, no foul.”

While most of us don’t have the resources to paint a 20-ft mural to attract a date (something Custalow told ABC news, was “not meant to come across creepy. This is just following up on a really cool and impactful interaction. This is still lingering with me”), there are still a few things we can learn from this story and apply to our online dating lives.

In case you haven’t noticed, life moves pretty fast these days. If anything, Custalow’s story is a prime example of why it’s important to seize romantic opportunities when they’re in sight — and this doesn’t just apply to attractive strangers you meet on public transit. If you see someone online that looks interesting, don’t hesitate to introduce yourself. There’s a good chance that if you shelve the person in hopes of talking to them later, you’ll have missed the chance to establish a connection. I mean, how many of us have thought, “I’ll message them later” only to go back a few days later and discover that the person in question has deleted themselves from the app? You’ve got one shot. Take it.

Not all dates start online! While online has become the norm, don’t close yourself off to the possibility of also meeting people in person. Whether they’re sitting across from you on the G train or on the treadmill next to you, if you sense there’s chemistry, there’s zero harm in respectfully approaching them and introducing yourself. The interaction might not go anywhere, but taking the initiative in these kinds of situations will make you a more confident dater both online and offline.

Attract the attention of people online, before you even have to think about painting a mural or renting out a billboard, by being totally and completely yourself. I’m a firm believer in the idea of ‘like attracts like’, so don’t be afraid lean in to who you are and all of your nerdy pursuits. Wax poetic about your love of Settlers of Catan. Wear that Lesley Knope lapel pin with pride. By being unafraid to show who you are (versus who you think people expect you to be) you might just attract someone as perfectly unique as you.