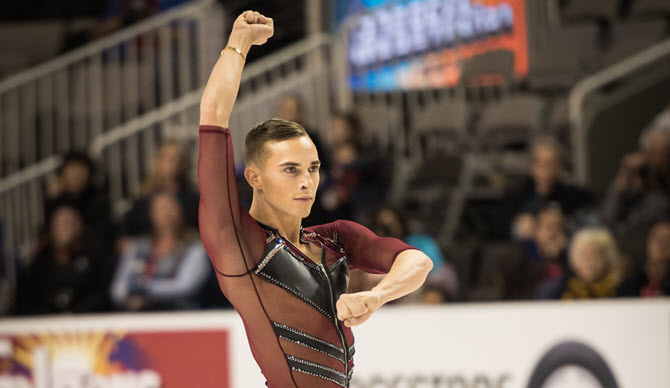 Unless you’ve been living in isolation for the past few weeks, you’re probably aware of Olympic figure, Adam Rippon. Not only is the bronze medalist a stunningly talented figure skater and outspoken, openly gay athlete with eyebrow game for days, he also has one of the best Twitter feeds ever. If you’re not following him, you’re seriously not living your best life and need to go rectify that immediately. He also may be our next dating guru.

In one of the best Olympic interviews ever, Rippon discussed his ideal sponsor. Long story short: he doesn’t have one and will happily take any paying sponsors. As he told CNBC’s Ross Sorkin, “I love money.”

What followed was a tweet from CNBC correspondent Kayla Tausche, which highlighted the exchange: “Adam Rippon tells @CNBC he’s not picky and doesn’t have an ideal sponsor: ‘I love money.'” Rippon then quoted the tweet with a hilarious two word caption: “Tinder bio.”

Even Tinder agrees that it was a tweet worthy of gold:

You and me both, Tinder.

When it comes to dating, we could all learn a few things from Adam Rippon and his amazing Twitter feed.

1. Be brutally honest about what you’re looking for.

Adam doesn’t skate around the bush. While speaking to CNBC he was completely and unabashedly honest about what he’s looking for: money to support himself while he continues his career as an elite athlete. Through his honesty, he shone light on an important issue: that many elite athletes struggle to support themselves financially. So, whether you’re looking for a sponsor or a date, there’s no glory to be found in hiding your desires. If a serious relationship is what you’re after: speak up. On the contrary, if you’re just looking to keep things casual, own it. You can’t get what you want unless you ask.

2. Tell the truth about your life.

While it would be easy for Adam Rippon to sugar coat his past and come up with a fairytale-like backstory (after all, he looks like a magical Disney prince) he chose instead to be upfront about his life. “Six years ago, I had no money to my name. I was living in my coach’s basement. I just leased a car and I got a letter in the mail saying that my credit was so bad that they needed to take the car back…..My coach co-signed on the lease so that I could keep the car and he said: ‘I trust you. And I trust that you’re going to work hard.'”

So, basically Adam Rippon is the complete opposite of that dude we’ve all met online that claims he’s a “successful entrepreneur” that owns “several homes and boats” — and we’re 100 percent here for it.

I was recently asked in an interview what its like to be a gay athlete in sports. I said that it’s exactly like being a straight athlete. Lots of hard work but usually done with better eye brows.

One of the best moments of Rippon’s interview with CNBC is when he looks straight into the camera and says, “you need me.” You maybe don’t want to put that on your online profile, but as Rippon has shown us, there’s something to be said about being confident and secure in who you are.

4. Make mistakes. Learn from them. Grow.

There’s always going to be negativity. Whether that’s haters who want you to fail at the Olympics or people who think you should just stop being so picky and “settle.” Don’t listen to people who are just trying to bring you down.

To all those who tweet at me saying that they “hope I fail”, I have failed many times many times in my life. But more importantly, I’ve learned from every setback, proudly own up to my mistakes, grown from disappointments, and now I’m a glamazon bitch ready for the runway.

Take it from Adam Rippon — instead of looking at mistakes as setbacks, see them as opportunities to grow and become even more badass than you are now.

5. A sense of humor is everything.

We love Adam Rippon is because he isn’t afraid to speak his mind and laugh at himself. A great sense of humor is charming and will not only will win hearts, but will also help you bounce back from disappointments. While it’s easy to feel dragged down by dating, it’s important not to take the process or yourself too easily.