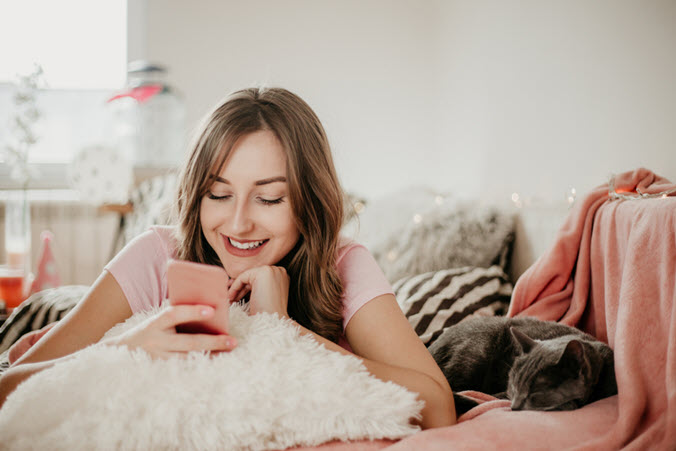 Tell me if this sounds familiar: it’s 8pm on a Tuesday night. You’re sitting in front of the TV, casually binge watching the last four seasons of Scandal; eating Smart Food in one hand and swiping through possible dates in the other. You like anyone who looks mildly cute, because why not? There’s a 90 percent chance that you’re never going to initiate a conversation with any of these people, let alone meet them for a drink. At best, you just want a bit of an ego boost and to feel like there’s people you could date if you actually wanted to. You’re actually lukewarm on dating these days, but the mindless swiping at least makes you feel like you’re trying. Sort of. After all, didn’t your friends just tell you that you need to “put yourself out there” more?

There’s a word for this kind of behavior. It’s called “obligaswiping.” Coined by Cosmopolitan writer, Carina Hsieh, she explains how she’s a veteran obligaswiper. “I go on there with the intention of meeting someone, really. But whether it’s the result of crushed expectations from years of dating app experience, shyness, or just pure laziness, I never stay into it. By the time plans start being made, I’m fully bored and out the door. I binge swipe and go super hard at Tinder or Bumble or Hinge for a day or two and then immediately find myself either disgusted by my thirst or just bored.”

When explaining why she feels compelled to obligaswipe in the first place, Hsieh writes, “I swipe because I feel like I have to, and then I stop before actually meeting up. I’ve jokingly called this behavior “obligaswiping,” because it’s inspired by an obligation to prove to myself that I’m “putting myself out there.” Really, I just want the cheap and easy route: a bunch of matches with hot guys I could “totally date if I wanted to” but who I don’t care enough about to follow through.”

Like Hsieh, I’ve also done my share of obligaswiping. I do it for the same reasons she mentions above. As a single person I feel like I should. I also want to feel like I’m doing something about my singleness while also not really doing anything. Also, swiping is fun. The way dating apps are set up, looking through potential dates feels scarily similar to scrolling through your Instagram. What could it hurt to toss out some hearts & likes? (Also, looking at guy’s selfies makes commercial breaks moderately less painful).

But as Hsieh points out in her article, obligaswiping is more than just an attempt to quash boredom. Dr. Nikki Goldstein, a sexologist and relationship expert and author of Single But Dating: A Field Guide to Dating in the Digital Age, tells Cosmopolitan it’s all too common for singles to feel personally responsible for their own singleness. “Obligaswiping” is an answer to that. “[It] can shift that feeling of being responsible for being single,” Dr. Goldstein says. “That way, you can rebut a friends’ comments with, ‘But I’m on Tinder and Bumble.”

However, the weird thing about obligaswiping is that it can feel just as (if not more) draining than actually dating. Instead of reinvigorating your dating mojo, it can dampen it further (and maybe even prevent you from fully enjoying those Scandal episodes).

So, here’s my solution: be as intentional as you can with your online dating habits. If you’re not really in the mood to date, don’t feel guilty. Disconnect from your usual apps and take a much-needed break. Focus on yourself. Hang out with your friends. Do stuff that you enjoy. When your dating mojo returns, come back to the apps with a fresh set of eyes. There’s no point being on a dating app if you don’t actually want to go out with anyone.

Secondly, don’t feel responsible for your own singleness. Regardless of what society suggests, being single isn’t an issue that needs to be “solved.” Sure, you should make an effort meet new people if you genuinely want to, but “putting yourself out there” can simply mean showing up for your life and nurturing other kinds of positive relationships while staying open to the idea of love — something that’s so much easier to do when you’re not staring at your phone.