Home > Money Savers > How Free is a Free ATM? 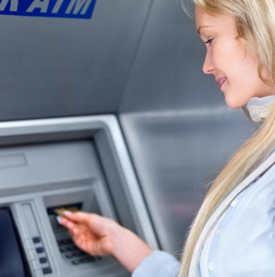 Almost all of the news I get is free because I get it online and it’s paid for by advertising. But now, consumers may have the opportunity to get other things for free. A new company is giving users the option of viewing an ad instead of paying a fee at ATMs. This means I can stop wondering if it would be more economically sound to keep my money under my mattress. The ATMs wouldn’t be associated with any bank and the advertising money would cover the fee that you normally get charged for using an ATM belonging to a bank where you don’t have an account. There could still be fees from your bank for using an ATM that isn’t theirs, but it’s a good start.

The founder of Free ATMs NYC, who are installing the machines, say that a given transaction should take the same amount of time as it would without the ads and users will still have the option to pay a fee instead of viewing the ads.

I have to wonder who would choose that. I tend to be good at ignoring advertising (chalk it up to a mom who would NEVER buy the toys in the commercials) so I’m all for anything that gets rid of bank fees. On the other hand, I do wonder what could be next. How many services could I get for free if I’m willing to be advertised to? Besides our online news, TV and music which come with healthy doses of advertising a lot of web services, like the web designers we review, will give you a free trial in exchange for their logo prominently displayed on your site.

So little by little we are not only the targets of advertising but can easily become advertisers ourselves. When I put it this way, all of a sudden it sounds a bit creepy. On the other hand, I still like free stuff.