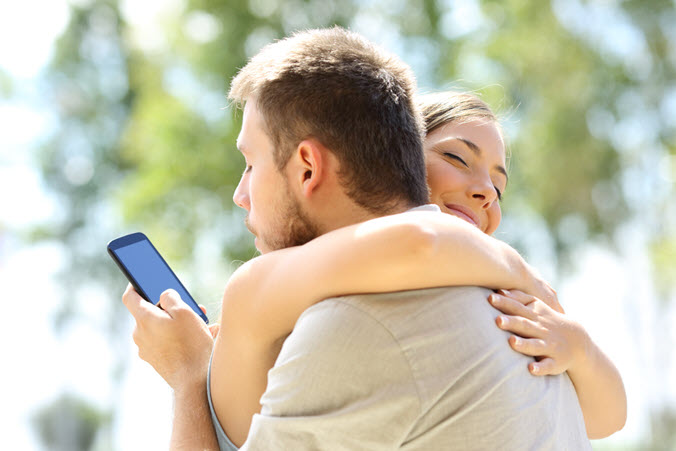 From “breadcrumbing” and “mosting” to “deepliking” and “submarining,” lately there seems to be no shortage of new words to add to our ever-evolving dating vocabulary. Hailed as “dating trends”, many of these terms are less “trends” and more just descriptors of dating behavior that’s, well, kind of annoying.

To get some insight on the latest dating trends to add to watch list, I recently spoke with Carmelia Ray, a Matchmaker and relationship expert based in Toronto.

Here are a few of the new dating behaviors you should be aware of and some tips on how to avoid their pitfalls.

If someone doesn’t return your texts but insists on liking every photo of your cat, you could be suffering from a “Haunting.” According to Ray, “Haunting is very similar to Ghosting, except for the fact that your Ghoster or a relationship from your past, sticks around through your social media feeds. The Haunter doesn’t interact with you in real life – they just linger and make their presences known on your social media profile. They could be watching your stories, and throw in an occasional and often out of the blue, like. They make their presence known in your digital space and haunt you from a distance.”

However, unlike a ghost, the haunter refuses to stay in the shadows. “Just when you thought they went away and ghosted you, there they are, commenting on your latest post as if to say “Boo. I’m still here,” says Ray.

Remedy: If you’re currently experiencing a haunting, there are a few things you can do. You can ignore the mysterious ghost who doesn’t fully want to go away or you can take it a step further and block them. You can also call them on it if/when they resurface next. A few years ago, I was being haunted by someone who had ghosted me. Eventually, I messaged him and simply asked what his intentions were and this was enough to scare him off completely.

At the end of the day, haunting is a very passive-aggressive way of staying in touch with someone. If it’s friendship they’re looking for or something more, the right person will be upfront about it instead of lurking in the shadows of your Snapchat. No ifs, ands, or buts.

If you’re currently haunting someone’s social media, please don’t. Sticking around when you have no intention of making a move, is a waste of everyone’s time. Take the advice above and be intentional about your dating choices. Either shoot your shot or fade yourself out for good, so you can pursue new people that you actually want to be with in a real way.

What do monkeys do in the wild? They swing from branch to branch off trees in the jungle like it’s no one’s business. As Ray explains, “this is the same dating behavior and pattern displayed by some digital daters who practice going from one relationship to the next, without a chance to breathe in between.” So, how do you spot Monkeying in the “the wild”? Easy.

“Monkeying while dating is a pretty obvious and recognizable pattern. Singles who bounce from one relationship to another are actually “monkeying” and tend to repeat bad dating habits as well,” says Ray.

Remedy: Think you might be dealing with a monkey? Don’t be afraid to gently probe them about their previous dating experience. Ask them when their last relationship ended and what they learned from it. If it ended super recently or they can’t articulate what they gained from the experience, it could mean that they’re swinging from one person to the next without actually giving themselves any space to heal or process.

On the other hand, if you tend to go from one relationship to the next, it might be time to press the pause button. In order to be happy in a relationship with someone else, you need to have a happy, healthy relationship with yourself. Instead of jumping back into the dating pool, take some time to be by yourself and reflect on your last relationship.

Feel like you may be getting played? It could be that you’re dealing with a “Layby.” By far the most sinister of these new dating trends, “the term lay-by is very similar to “cushioning” and “bread-crumbing.” The layby dater is guilty of continuing to date online while in a relationship. It’s as if they are looking for a way out of their current relationship by starting another one,” says Ray. As she explains, “derived from the term “layaway” this Laybyer begins to invest into a new conversation, new flirting, and new communication as a tactic to get out of the one he’s currently in. Laybys get bored or disinterested, so they move on, before breaking up.” Yikes.

Remedy: If you think your date may have other people standing in the wings, pay attention to their behavior. Do they check their phone often when they’re with you? When you mention making plans in the future, do they dodge the conversation? This could be a sign that your date has other people waiting in the wings.

Unfortunately, there are no hard and fast rules when it comes to identifying and avoiding these toxic dating behaviors. However, a lot can be solved with an honest, open conversation. If you’re not sure what the other person’s intentions are, ask them. You might be surprised at how much unnecessary drama you can avoid just by having a straightforward chat.