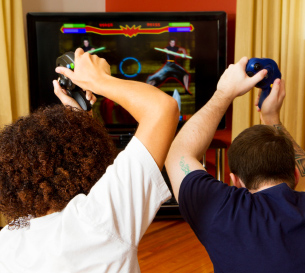 With the popularity of shows like the Big Bang Theory, geek culture is slowly becoming familiar to the mainstream and I too have dabbled. Although I have to confess to only having seen one Star Wars movie, I have played a MMORPG and can even tell you what that stands for (Massively Multiplayer Online Role-Playing Game. Take that.)

I don’t know if I’ll be taking the next step by signing up for the Star Wars MMORPG that debuts tomorrow, but two million players did sign up for the beta version and 90% of those say that they plan to buy the game. As of last week, 64 servers in the U.S. were nearly full, although the 42 European servers are still fairly empty.

MMORPGs allow players to create a character that interacts and competes within a permanent world inhabited by the millions of other players. The most popular by far is World of Warcraft, which had over 12 million subscribers last year, although the numbers have dropped more recently. In contrast to Star Wars’ 106, World of Warcraft uses 491 operational servers.

The makers of the new game, Star Wars: The Old Republic, are hoping to capitalize on the popularity of the Star Wars franchise to become serious competition for World of Warcraft. The game is set thousands of years before the Star Wars movies but allow the users to play in the same world, on Hoth, Alderaan and Tatooine, as a Jedi warrior or Sith assassin to name just a few.

Reviewers seem torn. Some praise The Old Republic’s attention to story line. Extensive voiceovers help to create an even stronger connection between players and in-game characters. However, some say that it will not be able to compete with the breadth of content that World of Warcraft has created over the years. In addition, World of Warcraft developers are continuously reacting to their audience.

In an interview in the New York Times, World of Warcraft game director Tom Chilton said yesterday “it wasn’t realistic to try to get the audience back to being more hard core, as it had been in the past.” Past players have moved on in their lives and don’t have as much time to invest. In order to hold on to these players, World of Warcraft challenges that used to be for very high level players can now be taken on by groups of more casual players working together.

These games create whole worlds and real communities and relationships often come out of them. While a lot of reviewers have considered the technical quality of each game, I wonder if that aspect of human interaction is going to provide an additional challenge to Star Wars: The Old Republic. Even if they can recreate the same quality as World of Warcraft, it will still be like asking people to settle a new planet.