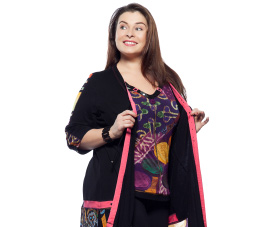 Online dating services sometimes cater to very specific niche markets. And I understand that this is very important for people looking for a partner who shares a meaningful value or lifestyle: religion, political activism, or even something like vegetarianism. But recently, a new site has opened up called The Big and The Beautiful, which caters to “curvy” women.

Its founder, Whitney Thompson, is a plus-size model and was the 2008 winner on America’s Next Top Model. She says that she saw the need for a site like this through her own online dating experience, when she could describe herself as a model and see men’s disappointment when they met her or call herself a plus-size model and not get dates in the first place.

The appeal is understandable. We tend to assume that men see big as a bad thing but this site allows women to celebrate their larger size and expect the men they meet to be celebrating it too.

But it’s those same men who I would be worried about. Thompson claims that the company carefully sifts through profiles to make sure that they are not simply men with fetishes for large women. But I’m not sure that’s really the problem.

We’ve all heard “If he can’t see how wonderful you are then he doesn’t deserve you” and there’s truth in that. It hurts to be ignored because of your physical appearance. Men who do it miss out on a lot of smart, fun, kind women. And who wants to date a guy who’s willing to forego that stuff anyway? If a man is limiting himself to plus-size women, he’s just as much choosing a body type over a personality type.

However, I could be starting with a false premise: That the goal of being on a dating site is to find a long-term relationship. The Big and The Beautiful does allow users to specify if they’re looking for that or just a fling. If the relationship you’re looking for is purely physical, then there’s no problem with a guy who really appreciates your individual style of outer beauty. So I guess this is a great opportunity to let loose and appreciate curves for their own sake.